HoneyLove is a nonprofit conservation organization with a mission to protect the honeybee population and inspire and educate new urban beekeepers. Honeybee pollination alone adds more than $15 billion in value to agricultural crops each year in the United States; one in three pieces of food is touched by bees. In a nutshell, if the bees go, they’re taking us with them.

Growing up in Texas with a beekeeping father, Paul learned about all-natural treatments and the responsibilities of serving as a foster parent. Year later, he rose to the occasion of stepping into those shoes by performing a home rescue on his own property in Santa Monica. He was quickly introduced to the works of the urban beekeeping nonprofit named HoneyLove, and has been fascinated with the craft ever since.

Serving as an Executive Director and spokesperson, Paul has been interviewed around the world, participated in PSAs and commercials, and created a documentary to encourage, educate and show the public how easy it is to help the bees. And being that Hollywood IS his backyard, Paul personally executes city-wide rescues and hive maintenance for A-list celebrities who have taken the leap into urban beekeeping.

Every day he furthers a vision is to inspire and activate people to action through powerful storytelling— creating healthier and more sustainable bee communities across Los Angeles and the entire USA. 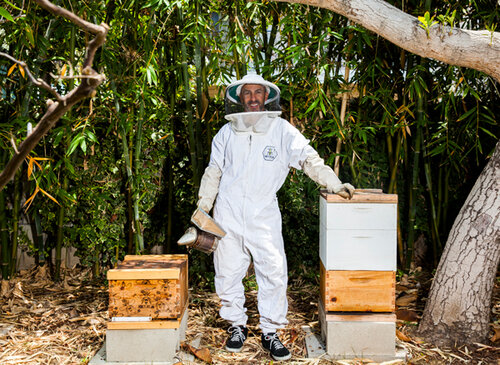 A happenstance opportunity sparked a historic family passion into a cause to be championed.

Creating a path for generations across the country to engage in a practice positively impacts the world.